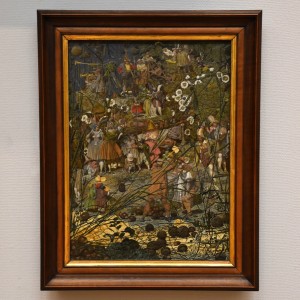 A curious piece of art on display in Tate Britain inspired musician Freddie Mercury to compose a classic Queen album track in the early 1970’s.

It would have been understandable if Freddie had felt the need to take his fellow band members to Tate Britain to view the painting, to explain the unusual lyrics he had written based on the weird and wonderful characters portrayed in the work of art. 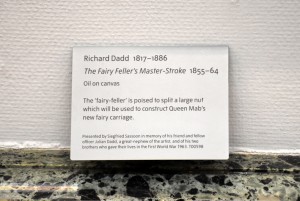 Richard Dadd was one of the most accomplished English artists of the 19th Century. He was admitted to the Royal Academy of Arts in 1837 where he won awards and admiration from his peers.

The Fairy Feller’s Master-Stroke was painted by Dadd over a nine year period (1855-1864) while he was an inmate at Bethlem Hospital (Bedlam) after going insane and killing his father. The majority of his most acclaimed work was completed while he was incarcerated in Bethlem. 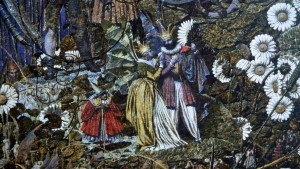 ‘ Oberon and Titania watched by a Harridan ‘

Apart from Oberon and Titania ( A Midsummer night’s dream ) all the characters are conjured up from Dadd’s own imagination. 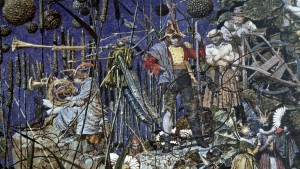 ‘a dragonfly trumpeter-he’s my hero’

Within the gallery’s surroundings Fairy Feller’s seems small and insignificant, that is until closer inspection. Once your eyes are engaged by the strange scene of an axe wielding man (Fairy Feller) about to crack a nut, being watched by the oddest array of characters imaginable, your nose tends to get closer and closer to the canvas. 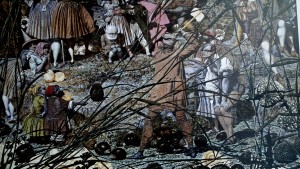 ‘The Ostler stares with hands on his knees’

A poem entitled ‘Elimination of a Picture and its subject – called The Feller’s Master Stroke’ was later penned by the artist to explain the story within the painting and give the characters names, which a century later inspired Freddie Mercury to compose his own tribute to a curious work of art.

The song has similarities with the painting, complex and multi-layered they both have intricate detailing. The Fairy Feller’s Master-Stroke is on the bands 1974 album Queen II. Recorded before Queen had achieved any real chart success the album is Rock based rather than Pop. The song features Freddie on lead vocals and Harpsichord/Piano whilst drummer Roger Taylor supplies high pitched backing vocals ( Truro Cathedral choir boy ), a feature of early Queen albums. The music and the painting are both strange but brilliant.