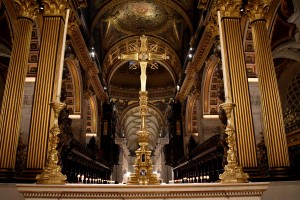 A relatively modern addition to the Cathedral is the American Memorial Chapel. The Chapel commemorates the 28,000 American servicemen and women killed whilst based in Britain during World War II, and was installed at the Eastern end of the Cathedral in 1958. The impressive High Alta can also be found in this part of the Cathedral and is a detailed replica of Christopher Wren’s bomb damaged original. To the West of these is the Quire.

Grinling Gibbons was reputedly the finest woodcarver of his generation. His superbly detailed work on the Quire Stalls, and in particular the thrones of the Lord Mayor and Bishop of London is some of his finest work. Either side of the Quire is the North and South Quire aisles, both lead to the Alta. 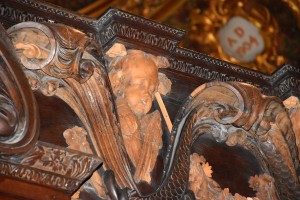 The Alta, situated immediately under the magnificent Dome, is not only the ceremonial centrepiece of the Cathedral but also the location that other levels of the building can be accessed. These include the Crypt, Whispering Gallery, and the Stone and Golden Galleries. 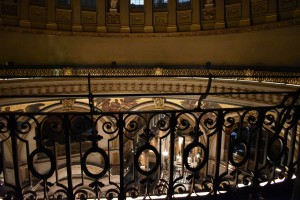 West of the Alta is the enormous Nave, leading to the Baptismal Font and the Great West doors. The massive doors, memorably used for the Wedding of Prince Charles and Lady Diana Spencer in 1981 are only opened on special occasions. 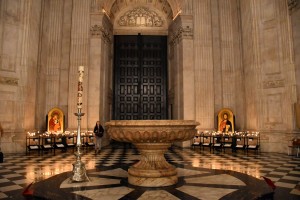 The only monument from Old St. Paul’s to survive the 1666 fire was that of John Donne, former Dean of the Cathedral and can be found in the South Quire aisle. There are now many monuments on the Cathedral floor, all added since the first ‘new’ addition, that of Prison Reformer John Howard in 1795. These include military figures such as The Duke of Wellington, Lord Nelson, and General Gordon, together with greats from Literature and the Arts.