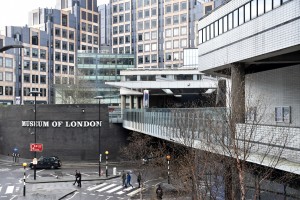 Incorporated into the Barbican Estate the excellent Museum of London is located on London Wall, Northern boundary of the Roman city of Londinium.

The Museum’s primary focus is the rich and often traumatic history of the area where all of London grew from, The City of London ( also known as The Square Mile ). Inside you can learn about Londinium’s Amphitheatre, and discover how catastrophic events through history such as War, Plague and Fire affected the lives of citizens.

The Museum of London has over 7,000 objects displayed throughout it’s nine galleries, some only discovered recently during excavations for modern projects such as Crossrail. 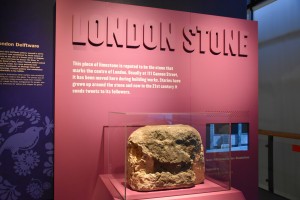 Most of the galleries represent a different era in time within the old city, but some concentrate on the expansion beyond the city walls to create the metropolis we now recognise. The Cauldron used in the opening ceremony of the London 2012 Olympics is just one of the many exhibits representing the modern city.

Although entry into the main galleries are free, additional exhibitions are run that may require advance booking online.  A recent exhibition I enjoyed was Fire!,Fire! which told the story of the Great Fire of 1666.