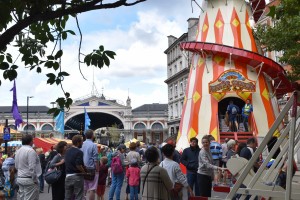 Celebrating one and a half Centuries of the New Smithfield Market buildings, which in common with the City of London’s other Victorian market buildings Billingsgate and Leadenhall was designed by Architect Sir Horace Jones.

Smithfield 150 was a Free festival, advertised as ‘London’s Biggest Birthday Party’ it took place over Saturday and Sunday of the August Bank Holiday and was expected to attract around 30,000 people to the historic area of Smithfield, a few minutes walk North of St. Paul’s Cathedral. 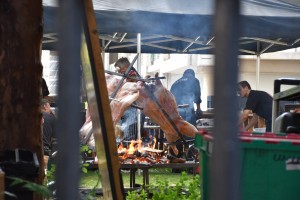 The entertainment was certainly varied and catered for all ages. The Under 5’s had their own ‘Hang Out’ area whilst others (looking for a less active Bank Holiday) slumbered in Deck Chairs listening to the excellent Fulham Brass Band playing on one of several live music stages. 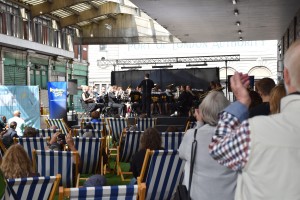 West Smithfield (adjacent to the market buildings) was filled with colourful stalls, including some City of London organisations and institutions such as Barts Hospital and City of London Guides, offering free tours of the historic local area. Food stalls stretched out along Long Lane with plenty of seating and further along the lane the main bar did brisk business. 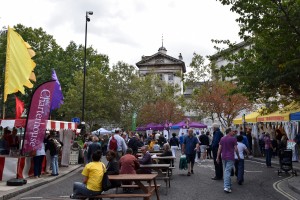 The Smithfield area hadn’t seen such an event since the demise of the notorious Bartholomew Fair in the mid 19th Century. Historic St. Bartholomew the Great Church hosted a Hog Roast within it’s grounds, whilst rides including a Merry-Go-Round and a large Helter Skelter proved popular with the crowds in West Smithfield. Perhaps Smithfield 150 could tempt City authorities to re-introduce an annual event to this historic part of London, let’s hope so.