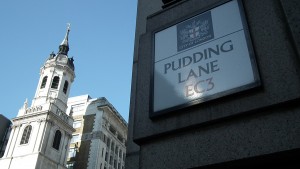 Just a few metres from Pudding lane, St. Magnus was the second of the city churches to be consumed by the great fire.  The church has 12th century origins, and is dedicated to the Norwegian Earl of Orkney who died in 1116.

Christopher Wren rebuilt the church in Portland stone, at a cost of £ 9579 between 1671-6, it’s 185ft high steeple was added in 1705. The large clock on the west side was built by Langley Bradley and dates back to 1709. The steeple and clock became landmarks for generations of Londoners as they crossed old London Bridge, the only southerly entrance into the city for more than 500 years. The pre-fire church would have been the first sight of the city for Henry V as he crossed the Thames on his triumphant return from Agincourt in 1415. The bridge and church stood side by side for over six hundred years, until a new London bridge (John Rennie) was built up-stream in 1831, the old bridge being dismantled. Stones from the old structure can be found in the churchyard, and inside the west door, a 4 metre long model bridge made in wood.

In the 1560’s Miles Coverdale, translator of the New Testament, was Vicar here. He was reburied here in 1840, and memorials to him can be found in the church.  Internally, St. Magnus the Martyr is impressive, some of the carved woodwork is especially detailed. Remnants of the 17th century include the pulpit and reredos, the latter exhibits the work of master wood carver Grinling Gibbons. A door leading out onto Thames Street was blocked up in 1872, due to noise pollution, and the stink coming from their neighbours, Billingsgate fish market.

Although this is a Wren church, it has had many alterations since the 17th century, and therefore may not be the natural starting place to discover Wren in the city. However, St. Magnus the Martyr’s ancient location at the foot of old London bridge has given the church a unique place in London history, and always worthy of a visit.

‘ The Friends of the City Churches’ open this church most Wednesdays 12 noon – 4 pm.