Rebuilding The City of London’s Churches

In the wake of the Great Fire of London in 1666 ‘The Commission of Rebuilding’ was appointed, Christopher Wren became ‘Principal Architect’.

87 of the 107 City Churches had been destroyed or damaged, was it necessary to rebuild all of them?

Eventually, the 2nd Rebuilding Act of 1671 (the 1st was 1667) stipulated that only 51 Churches (and St. Paul’s Cathedral) would be rebuilt. Much currying of favour with Wren’s Office* from the representatives of individual churches ensued. Including the structures not affected by the fire, this would give the post-fire city a full complement of around 75 churches.

Money for the rebuilding costs would come chiefly from a coal tax, imposed on all coal entering the port of London, at a rate of 1 shilling per ton. The money was divided into three. It would go towards the rebuilding of the churches, St. Paul’s Cathedral, and for general street improvements. The tax continued until 1716. Work on most of the churches started in the early 1670’s, but in many cases their elaborate and expensive Steeples were not added until many years later, quite commonly into the early 1700’s. 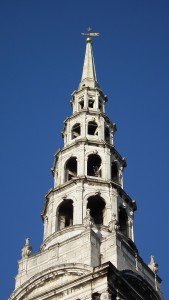 For the church interiors Wren employed the finest craftsmen of the day.  The coal tax may have paid for rebuilding the structures, but the parishes themselves would raise the money required to furnish the interiors. Masons, Woodcarvers and Plasterers would all play their part in this defining moment of London history. An important feature of the post-fire Wren churches was the use of Plain glass for windows, not Stained. The buildings being replaced were mostly medieval, with dark interiors, Wren wanted as much natural light to illuminate the interiors as possible. Design fundamentals of the new churches would include, good vision of the Minister standing at the Pulpit, together with the ability for all the congregation to hear Sermons clearly, through improved acoustics. The post-fire interiors would influence church design for centuries to come. The plain exterior of many churches reflected the financial planning involved. Wren re-used the medieval foundations of many churches, whilst recycling materials from other buildings destroyed within the devastated city. The superb interiors and Steeples however, are the signature features of the classic Wren Churches.

*’Wren’s office’ is a term used to include Christopher Wren’s more than able assistants. These included his friend and fellow scientist Robert Hooke, and architect Nicholas Hawksmoor. Both men have left their mark on the city skyline.

Although several factors have helped reduce the number of Wren’s City Churches, two were more profoundly felt than any others.

The Union of Benefices Act 1860:   An unfortunate but necessary act due to the declining population in the city, which had started in the 18th Century and accelerated into the next.  Many churches were empty as early as the 1830’s. This act sounded the death knell for 10  churches, demolished between 1868 and 1897.

World War II (The Blitz):  The Blitz destroyed or damaged most city churches, and could have been the end for many of Wren’s designs, amazingly only five were completely lost. The majority were rebuilt or restored as close as possible to his original plans, but others have only their tower’s remaining to remind us of their former glory.

Wren’s churches in the 21st Century are adapting to survive, within the confines of a city with insufficient worshippers to accommodate more than a handful of Parish Churches. Many would be redundant but have found other uses. Several are now Guild Churches, whilst others are used by city organisations and institutions, both religious and secular.  A good example of this is St. Edmund King & Martyr on Lombard Street. Prior to the Bishop of London suggesting a new use for the church, the decaying building had become redundant. The Church is now home to the London Centre of Spirituality. The Nave has become a well stocked bookshop which is open Monday to Friday. The regular workshops and meetings, held both mid-week and weekends, ensure St. Edmund’s has a future in the 21st Century City. An important organisation to emerge in recent times is the ‘ Friends Of the City Churches ‘, whose volunteer  ‘ Watchers‘  open the lesser used churches to the public and  organise events that utilise the buildings. There website gives details of church opening times for public viewing and other relevant information.

The remaining churches within the City of London form a unique collection of buildings, all are grade I or II listed.  Only 24 of the 51 churches rebuilt by Christopher Wren’s office after the Great fire of London remain, many have required extensive restoration. Amazingly this historic group of survivors largely avoided the worst ravages of War, and the axe of reform.