The Stone Gallery (casts a shadow) 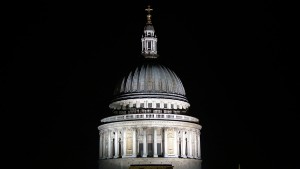 The Dome is St. Paul’s most recognisable feature and soars over the Alta, ceremonial centre of worship within the Cathedral. Sir Christopher Wren’s clever design actually incorporates two Domes and a Cone, which have a combined weight of over 64, 000 tonnes. Inside the Cathedral is the wonderful spectacle of the inner Dome, beautifully painted originally by James Thornhill over a four year period, and completed in 1719. Pollution deteriorated Thornhill’s work so much that by the 1850’s it required repainting. At the base of the inner Dome is the famous Whispering Gallery. Popular with visitors, the Whispering Gallery gains it’s name due to the acoustic qualities present. When whispering into the domed wall on one side, a person listening close to the wall on the opposite side of the gallery can clearly hear the message. This is best tested when there are only a few visitors about. The gallery usually opens to the public at 10 a.m. 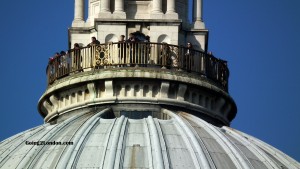 Higher still, above The Whispering Gallery, is The Ornamental Gallery. This area, which affords an amazing view down is unfortunately no longer open to the public, but was once accessible for a fee of 4 pence in the 18th Century.

The brick built Cone, sandwiched between the inner and outer Domes, is unseen to the public but supplies the structural strength for the whole design. The iconic outer Dome incorporates two viewing galleries, one at it’s base, and the other on top, both are accessed via the Whispering Gallery. The ‘Stone Gallery’ gives an excellent panoramic view of the city below, whilst the higher ‘Golden Gallery’ affords fantastic 360˚ panoramic views across London for many miles. Access to this higher gallery is not for the faint hearted, it is 528 steps up from ground level, and the final climb through a narrow section may be claustrophobic for some. Charles Dickens enjoyed the view from outside the Dome in 1856, as he climbed up to view the fireworks celebrating the end of the Crimean War.