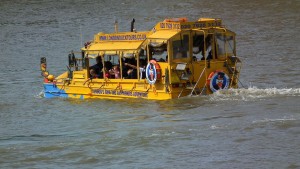 One of London’s most enjoyable and unusual sightseeing tours came to an end last month. Thames Water’s compulsory purchase of the slipway used by London Duck Tours to enter the River Thames has resulted in the company now operating an occasional land only tour, with the river Thames no longer accessible. The slipway ( next to the M16 building in Vauxhall ) is needed for construction of the Thames Tideway Tunnel, often referred to as ‘London’s super sewer’. 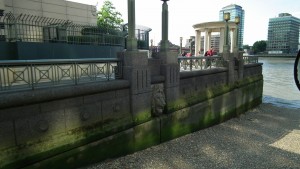 Nearly 2 Million passengers have enjoyed tours aboard the capitals distinctive yellow amphibious vehicles ( Duck’s ) including our own family on several occasions. The open-sided Duck’s took in many of London’s famous sights by road, but it was the water borne journey from Vauxhall up to Parliament ( and return ) that will live longer in the memory. London Duck Tour’s website says we can expect an update in January 2018 on it’s attempt to resume normal operations. Our family ( like many others ) hope that a new slipway into the Thames can be found and London’s yellow Duck’s can take to water once more.  www.londonducktours.co.uk

Here are some scenes captured by me on our Duck tour’s.