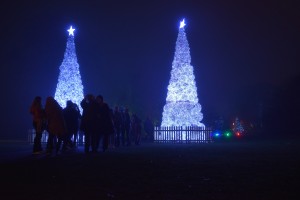 The popular Kew at Christmas is back for a fifth year in 2017. Our family enjoyed the festive spectacular last year, this was my post.

Two huge illuminated white Christmas trees marked the entrance to a trail that weaved for over a mile through the famous gardens in West London at Kew’s after dark spectacular.

The easy walking trail had something for everyone, including a Tunnel of Lights, a Fire Garden, a Christmas singalong DJ and Santa’s North Pole Village. The stroll was interspersed with seasonal fare from stalls offering favourites such as Mulled Wine and roasted Chestnuts and included at halfway an old fashioned funfair.

One of the most impressive sights of Christmas At Kew 2016 was the ancient trees ( that we had seen in the Autumn ) lit up in stunning colours from lights shining skywards from under their branches. 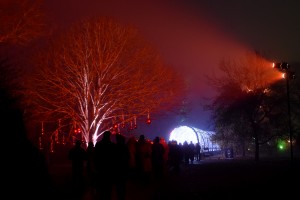 The grand finale after an enjoyable stroll through Kew Gardens historic grounds was a spectacular light show over the lake, lighting up the enormous glass Palm House, any photographers dream.