The ancient Events, Organisation’s & Ceremonies that  the City of London plays host to every year are steeped in history and tradition. The London City Guide has selected the following examples.

The oldest competitive rowing race in the world is contested on the River Thames every summer. London based Irish actor Thomas Doggett was manager of the Drury Lane theatre, as well as a staunch Royalist. He enjoyed the pleasures of ‘The Swan’ public house (amongst others no doubt) during the late 17th and early 18th centuries. The pub, near London Bridge, was also frequented by members of The Thames Watermen, who supplied the official oared ‘taxi’s’ on the city’s principal thoroughfare. Discussions were had and an agreement made, they would celebrate the anniversary of King George’s accession to the Throne with a wager, six young members of the Watermen’s Company would row for glory. On the 1st August 1715 a notice on London Bridge proclaimed,

“This being the day of His Majesty’s accession to the Throne there will be given by Mr. Doggett an Orange coloured Livery with a Badge representing Liberty to be rowed for by Six Watermen that are out of their time within the year past. They are to row from London Bridge to Chelsea. It will be continued on this day forever”.

On his death, Doggett’s will provided £ 10-00 per annum towards “five pounds for a Badge of Silver weighing about twelve ounces” and “eighteen shillings for cloth for a Livery whereon the said Badge is to be put”.  The Fishmongers Livery Company were entrusted with organising future races according to Doggett’s wishes, their Livery Company Hall is located on the river adjacent to the race start, London Bridge.

The Fishmongers Hall is also the venue for the post race reception which is attended by past winners of the coveted Livery, who also get the privilege of marching in front of the new Lord Mayor’s coach in November’s Lord Mayor’s Procession.

Harry McCarthy won Doggett’s race in 2014, emulating his father Simon who won the event in 1984.

In the early stages of the four miles covered from London Bridge to Chelsea Bridge it passes a suitable vantage point to view this colourful piece of London history, ‘Doggett’s Coat & Badge’ public house, situated on the south side of Blackfriars Bridge.

The Charity of Sir Richard Whittington

Sir Richard (Dick) Whittington of British pantomime fame was actually a wealthy city merchant and three times elected Lord Mayor of London. During his lifetime (1354-1423) Whittington donated money to many good causes. These included a maternity ward for unmarried mothers, and on the banks of the river Thames, medieval London’s finest public toilet, cleansed twice a day by the tide.

Sir Richard died in 1423, bequeathing money for the provision of Almshouses for the elderly poor. The fund, managed by the Mercers livery company, was set up in 1424. The almshouses moved from Highgate, North  London, to East Sussex in the 1960’s, but the carefully managed fund continues to supply good quality housing and money to worthy causes nearly 600 years after his death.

Founded in 1097 to raise funds for the construction of the first Stone built London Bridge, this ancient fund was able to pay for it’s replacements over the following 900 years. It now provides money for all five bridges that cross the River Thames into the City of London. The enormous combined annual Maintenance bill for Tower Bridge, London Bridge, Southwark Bridge, Blackfriars Bridge and the Millennium foot Bridge is met by the historic trust fund that also paid for their original construction, which now holds over £1bn in assets (2016). The City Bridge Trust annually generates a surplus of cash, over and above the amount required for bridge maintenance. The Surplus is used for charitable donations, which during the fund’s existence has resulted in hundreds of millions of pounds being donated to Londoner’s and the good of London.

In June 2017, following the London Bridge and Borough Market terrorist attack a Grant of £75000 was given to the charity London Emergencies Trust (LET) who distribute money to families and survivors of terrorist attacks in London.

The City Bridge Trust is as important to London and it’s citizens today as it was when it was founded nearly one thousand years ago.

Respected citizen and war hero Robert Knollys found himself in trouble with the Corporation of London in the late 14th century. He had a footbridge erected, connecting two properties he owned on opposite sides of Seething Lane, but without the permission of the Corporation. His good character and heroic deeds were factors in his lenient fine. It was decided that a single red rose would be taken from his garden and presented to the Lord Mayor, on the same day annually. On the 24th June every year church wardens of All Hallows by the Tower walk in procession from Seething Lane to the Mansion House with a single red rose on an Alta cushion and present it to the Lord Mayor. Sir Robert’s ancestors are invited to the ceremony. 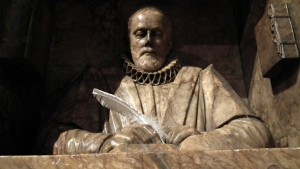 London born John Stow was a member of the Merchant Taylor’s Livery Company and London’s leading 16th Century Antiquarian. He was already a notable author through previous works, but in 1598 he published his most accomplished and celebrated work. ‘The Survey of London’ is an invaluable insight into all aspects of life within the city during the 16th Century, and has remained an important reference book for any budding London historian ever since.

Although interested in the history of his city from a young age, Stow was in his sixties when he ‘Attempted the discovery of London, my native soil and Country’, it took him eight years to complete.

After his death in 1605, a statue depicting John Stow sitting at his desk writing ‘The Survey of London’ was erected in St. Andrew Undershaft, his local church where he was buried. The Quill in his hand is replaced with a new one by the Lord Mayor during a ceremony that takes place on or around the 5th April, the anniversary of his death.