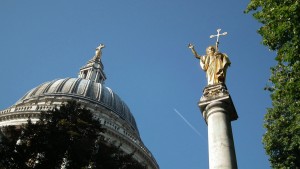 St. Paul’s Churchyard has a unique place in London history.

Within the vast expanse of the 12th Century churchyard, whilst King Richard was away crusading, the future King John denounced his brother’s despotic regime to the Freemen of the City. This was to be the first of many such meetings of national importance held over the coming centuries within the churchyard, but in time, meetings had a new focal point.

“Every event in the history of this Country for centuries was more or less connected with Paul’s Cross”.  Winnington – Ingram, Bishop of London, 1910.

St. Paul’s Cross was an open-air wooden pulpit (topped with a cross) where sermons were preached, heretics recanted and public pronouncements heard by the assembled masses.

This was far more than just a medieval ‘Speakers corner’. The pulpit played an integral part of life within the city, supplying important news for the citizens, religious, secular, and political. Emotions could run high, as they did during the reformation, when William Tyndale’s New Testament was burnt before a crowd, because it was printed in English. Speeches here could incite a riot, as it did in 1517 when the Evil May-day riots erupted after a racist rant from the pulpit. A mob that would eventually number more than a thousand strong rampaged through the City, targeting foreigners and their business premises. Several ring leaders were subsequently executed.

St. Paul’s Cross was destroyed following the English Civil War by Oliver Cromwell’s Roundhead’s in 1643. More than 200 years later, the foundations of the historic pulpit were found in the North-East of the Churchyard by the Cathedral Surveyor in 1879.

A Doric column of Portland stone standing 52 feet high, supporting a bronze of St. Paul, was erected in 1910. The monument depicts St. Paul holding a cross, and signifies the pulpits ancient location to the many thousands who visit the churchyard each year.

In 1606 the Churchyard was the scene of a grisly part of London history, four of the gunpowder plotters that failed to blow up Parliament the previous year were Hung, Drawn and Quartered here.

The Churchyard and surrounding area was the centre of the nation’s publishing industry, from the 16th Century until the devastation inflicted on the area during World War II. Stallholders sold poems, translations (both religious and secular) as well as the very first copies of many of William Shakespeare’s plays. The majority of London’s fast growing number of printers, publishers and booksellers were all in close proximity, in and around the churchyard, and close to the hall of the Stationers Livery Company. Diarist Samuel Pepy’s describes visiting his bookseller at St. Paul’s, and deliberating over titles by the likes of Chaucer, Stow and Shakespeare.

Paternoster Row, once the centre of bookselling in the area, has been completely redesigned since the destruction of World War II. The modern development is now called Paternoster Square, and includes the London Stock Exchange, and the return to the city of Temple Bar. Christopher Wren’s gateway to the City was dismantled and removed from it’s ancient location at the top of Fleet Street in 1878, and was relocated to Paternoster Square in 2004.