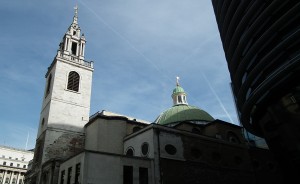 Sir Christopher Wren’s own Parish Church is one of England’s Architectural gems, and is regarded as his finest church in the city. The building is famous for Britain’s first Dome, Wren’s prototype for St. Paul’s Cathedral.

The church was founded in the 11th Century, on the Western bank of the Walbrook Stream. The Stream had become a Street of the same name by 1429, when work started on moving the church some sixty feet to the Eastern side of the Street. This higher and larger plot of land was donated by Lord Mayor Robert Chichley, a member of the Worshipful Company of Grocers.

The present church was built by Sir Christopher Wren from 1672-9, after the Great Fire. The Spire, however, was added more than thirty years later in 1713-15, and is thought to be the work of Nicholas Hawksmoor. The buildings abutting the church have changed repeatedly over the years, leaving the exterior brickwork of  St. Stephen’s looking a little exposed in places. Wren, under financial restraints with all his churches, was economical with outer walls not designed or expected to be viewed publicly. The Grocers Company donated money towards the rebuilding cost’s, whilst private donations paid for most internal furnishings.

Many of the 17th Century furnishings are still in excellent condition, including William Newman’s Font cover, Reredos, Screen, and superb Pulpit. The stone Font was made by Thomas Strong in 1679. The stunning Dome was decorated by Plasterers John Grove and Henry Dogwood and stands on eight columns.

Bomb damage during World war II may have been a blessing in disguise. The building had been ‘ Victorianised ‘  with stained glass added, removing some of the natural light that Wren had originally allowed for in his design. During the Post-War restoration (1948-52) they were replaced with plain glass. During the 1970’s St. Stephen’s was found to be subsiding , partly due to the ancient Walbrook Stream that runs underneath. Property developer Lord Peter Palumbo lead the fundraising campaign to save the church. The restoration was carried out between 1978-87, and included the commissioning of a new Altar. The eight columns supporting the Dome now encircle this controversial central Altar made of Travertine, it was made by Henry Moore in 1972.

The Samaritans was founded in this historic building in 1953 by Chad Varah, who was then the Vicar of St. Stephen Walbrook.