The City of London’s Cathedral: 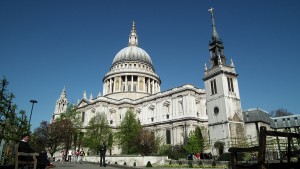 Over the past 1400 years the seat of the Bishop of London has witnessed some of the greatest events in English history. The present building has overlooked the historic City of London for 300 years and is forever associated with it’s famous designer, Sir Christopher Wren.

Four previous cathedrals have existed on this same site, on the top of Ludgate Hill, since the original was founded in 604 by Anglo-Saxon King Ethelbert. Mellitus, a Christian missionary, became the first Bishop of London at this time. It’s replacement was burnt to the ground by the scourge of 10th century London, Vikings. The constant medieval peril of fire also claimed the next St. Paul’s in 1087. 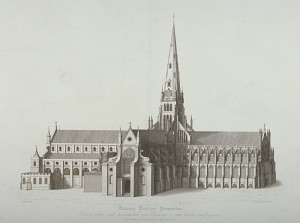 A marvel of medieval Europe, Old St. Paul’s, as it came to be known, was started during the reign of William the Conqueror. According to Elizabethan antiquarian John Stowe the building was constructed using techniques imported from William’s Normandy homeland, never seen before in this country. It’s construction spanned over 150 years, including the setback of yet another fire in 1137. Incredibly it was larger and higher than the building that stands today. The spire, which rose to around 500ft was struck by lightning in 1561 and was never replaced. The burning spire had badly damaged the roof, which mirrored the general state of disrepair the dilapidated cathedral was in by this period. The Cathedral for many years was disrespected, being used less as a place of worship and more as a meeting place for scheming villains and for local prostitutes to ply their trade. Street vendors found it a handy refuge from poor weather to continue trading, whilst locals strolled through, using it as a public thoroughfare.

Unfortunately, Old St. Paul’s fortunes took another turn for the worst during the English civil war (1642-51) when the Cathedral became a stable for the horses of parliamentary troops and was once again neglected basic maintenance. However, after the restoration of monarchy in 1660 Charles II granted a Royal commission to consider the options. Would they restore or rebuild? Any doubts surrounding the future of the old Cathedral were about to go up in smoke, quite literally. In September 1666 the Great Fire of London reduced the ancient building to ashes. Wren’s moment had come.

One of the world’s finest buildings was constructed from the proceeds of a tax, levied on coal entering the city, following the Great Fire. This not only paid towards the cost of rebuilding the Cathedral (over £ 700, 000) but also the city churches that Wren would help redesign. Sir Christopher Wren’s masterpiece is the only domed cathedral in England, taking 35 years to complete it remained the tallest building in London for 250 years. The present building evolved from his fourth attempt to satisfy both clergy and King. This was called the ‘Warrant Design’ and included a radical dome topped with a tall spire. It was given Royal approval in 1675, but the King gave Wren an allowance to make ‘some variations’ to the agreed plans if he saw fit. This actually meant ornamental changes, but the architect new that this was the opportunity he had dreamed of. Amongst many alterations, the spire would never see the light of day and the dome would feature more prominently than originally agreed. The employment of the finest craftsmen of the day ensured that the neo-classical Cathedral would not only look spectacular but would be a fitting centre of worship for a new post-fire London.

The first stone was chosen and laid by Wren, to mark the centre of 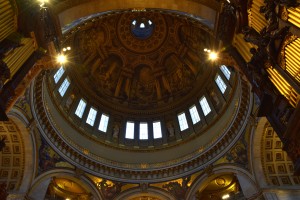 the dome. The stone was part of an ancient gravestone found in the rubble. On it was the apt inscription ‘ Resurgam ’ (rise again). Vast quantities of Portland stone was quarried and brought by boat up the Thames. Wren was aware that finances were not inexhaustible and had he started work at one end of the building and worked along to the other, he may not have been allowed to finish for financial restrictions. Instead he immediately got working on the ground – plan, working progressively up and so the whole Cathedral would emerge as one, in stages. This was painstakingly slow and contributed greatly to the 35 years it would take to complete. In 1697 a frustrated Parliament decided Wren would receive only half of his salary until the project was finished. Eventually in December 1697 the first service was held in the quire. It had taken 22 years for worship to resume and work would continue for another 13 years yet.

As Principal Architect for rebuilding the city, it seems incredible that Christopher Wren could simultaneously oversee the rebuilding of over 50 city churches whilst supervising the massive construction site at St. Paul’s. He set aside time on most Saturdays to view progress at St. Paul’s and nearing it’s completion, would be hoisted up in a basket to inspect it’s highest elevations.

On a momentous day in October 1709 the last stone was placed, in the lantern, high above the city. Christopher Wren allowed his son, also Christopher, to place the stone. Christopher Junior was born in the same year work commenced on the Cathedral, 1675.

Over the next few years the great architect was a regular visitor to the Cathedral.  He would often be seen sitting under the dome, gazing up.

Sir Christopher Wren died aged 91 in 1723. His tomb lies in the north-east corner of the crypt.

Christopher Junior worded the Latin inscription on his father’s tomb.

Reader, if you seek his monument look around you.