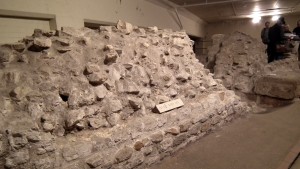 First bridge across the river Thames.

Historical dark period, no news of the city or its inhabitants (if any) until the Saxons arrive.

covers, East to West, from today’s Aldwych to Charing Cross, and from Covent

Garden down to the Thames, North to South.

The Saxons lose and then regain Control.

called Lundenberg). The two saxon settlements are now Lundenwic (outside the walls)

and Lundenberg (within the walls).