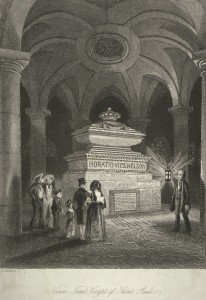 Print Reproduced by Kind Permission of The City of London, London Metropolitan Archives.

The Crypt in St. Paul’s Cathedral is the largest in Europe, housing the tombs of some of Britain’s most important figures. In the Crypt’s South East corner is the tomb of the Cathedral’s Architect, Sir Christopher Wren. This area has been labelled ‘Painter’s Corner,’ as it is also the last resting place for several of Britain’s finest Artist’s, including, J. M. W Turner and Sir Joshua Reynolds.

It is of no coincidence that overlooking Sir Christopher Wren’s tomb is a bust of Godfrey Allen, 20th Century guardian of Wren’s Cathedral and City churches. From 1931-56 he was the Cathedral’s Surveyor (to the fabric), as well as Commander of ‘St. Paul’s Watch’ during World War II. The ‘Watch’ were a committed group of volunteers, determined that the present Cathedral would not join it’s predecessors and succumb to the scourge of fire. Forty people every evening patrolled the Cathedral, ready to douse any fires caused by incendiary bombs.

The central area of the Crypt houses two of England’s greatest military heroes.

The Duke of Wellington, veteran of numerous military battles during the Napoleonic Wars, including the victorious Battle of Waterloo on the 18th June 1815, was laid to rest in 1852. His casket, made of Cornish Granite, is encircled by the banners that adorned his funeral procession to St. Paul’s. The procession was witnessed by a million people lining London’s streets.

Lord Nelson was laid to rest in the Crypt, immediately under the dome, in a black marble sarcophagus originally reserved for Cardinal Wolsey in the 16th Century but Wolsey lost favour with King Henry VIII and was denied his grand funeral. Nelson, England’s greatest naval hero, died during the Battle of Trafalgar in 1805. His lavish funeral service was conducted in front of the Cathedral’s Alta. The wooden coffin was made from  L’ Orient, a French ship defeated during the Battle of the Nile, whilst enormous flags taken from defeated Spanish and French ships draped down from the dome.

In the far East of the Crypt is the Chapel of St. Faith. The parish Church of St. Faith was located within St. Paul’s Churchyard before the Great Fire of 1666 destroyed both Cathedral and Church. Sir Christopher Wren incorporated the Chapel into his new Cathedral, as near as possible to the foundations of the old church to allow St. Faith Parishioners continuity of worship. The Chapel is now designated ‘Chapel of the Order of the British Empire’ and is where holders of the O.B.E award, together with family members, can be married and baptised.